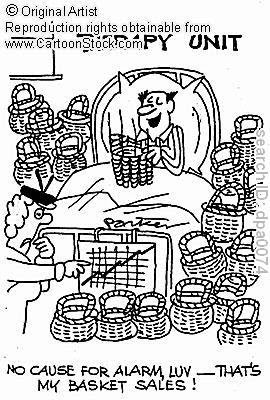 I'm glad some readers have enjoyed reading the 'love story', however it has just occurred to me that actually during the middle 90's there was at least one other steep learning curve occurring in my life.

I qualified as an Occupational Therapist http://http//en.wikipedia.org/wiki/Occupational_therapy in 1995 after receiving a 2:1 degree in the subject. Applying for my first job was a bit scary. I had been going out with Bri for some time but we had not made any firm plans for the future. So it was a giant leap of faith that made me apply for a basic grade post at a local hospital, rather than applying for jobs that would enable me to start to pursue my interest in children more. I really enjoyed working again (and earning money!). I was working with a reasonably nice bunch of people. I was the first mature basic grade they had ever had and so it took them some getting used to the idea that I was able to take on responsibilities that my predecessors hadn't wanted or hadn't been able to take on.

After less than a year it became apparent that I was outgrowing the post. I also had a bit of an issue with my boss, he had left his wife and children and remarried one of the other OT's in the department - this always felt a bit awkward. However the biggest problem I had was that he was practising clinical kineseology in the OT department. Clinical kineseology is an alternative treatment which draws on several ancient traditions of energy release, acupuncture along with more current biology. One thing it most definitely is not is Occupational Therapy. I was particularly concerned with the way it was being offered to elderly patients as OT, on making enquiries with our regulatory body, I finally decided that I had to speak up. Obviously this didn't go down to well. I was also not getting the regular supervision that I should have been receiving as a Basic Grade. I asked my Senior whether she thought it was time for me to apply for a senior post because of this, but she did not think that I was ready.

I had by this time also got married, this did give me a very different view on my work life. Work really was never going to be the be all and end all of my life. Call me old fashioned if you need to, I knew that I hoped to have children and that if able I wouldn't want to work while they were young.

I saw a job advertised for a senior 2 post (the next step up), it was only 4 days a week (this would help out at home with my husband working shifts getting a weekend together was rare). It was at a rehabilitation unit about 12 miles from my first job, I had experience of the unit as I had already had patients go there as out-patients or transferred there. It was a specialist unit for amputees and limb deficient children. It felt like yet another clear opportunity given to me by God, though my work with children would be small compared to the time I would spend with adults - it was there nevertheless. So yet again I was having experience of my God giving me immeasurably more than I could have imagined and maybe I can even say he was granting my hearts desire (even if I wasn't so sure what my hearts desires were!). I applied for the job and got it - this was the start of another great learning curve.

'Do not fret because of evil men or be envious of those who do wrong;
for like the grass they will soon wither, like green plants they will soon die away.
Trust in the Lord and do good;
dwell in the land and enjoy safe pasture.
Delight yourself in the Lord and he will give you the desires of your heart.' Psalm 37 :1-4 NIV
Posted by Jane D. at 10:05

Email ThisBlogThis!Share to TwitterShare to FacebookShare to Pinterest
Labels: Bible, My Story, Work