At some point after I had that first meeting with my husband to be, we must have discussed house plants - riveting stuff, hey! We would sometimes bump into each other at church, but no further steps were made, until I approached him and told him that I had a plant for him - having taken a cutting from one I had.
This was obviously the sign that he needed, I must have given him my telephone number as the next thing I knew he phoned and arranged to come and pick it up. Things were still very polite and guarded, we must at this point of discussed the fact that my 2nd Christian (born again) birthday was coming up in a few days . He left with the plant and that was that.

scarey!! My Christian birthday was an appropriate occasion he felt and so that was set. We had a brilliant evening, they even sang happy birthday to me in TGI Fridays! There was a quick peck on the cheek on being dropped home - but no kissing (I had made that deal with God, no kissing another man until I found the one that would be my husband!).
I was already hooked by this point, despite the not kissing! I made an excuse to go round and check that the plant was okay!!!! The plant had been named Audrey, and remains with us till this day. 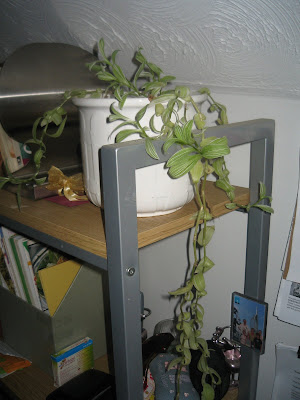 We saw each other every day, except for a weekend when he flew to New York on Concorde! and a few days in the summer holidays when I went off on a childrens Christian camp as a volunteer.

I won't bore you with anymore details, but the kiss finally took place in the most romantic of places and I knew it - THIS WAS THE GUY THAT I (AND GOD) WANTED TO MARRY.