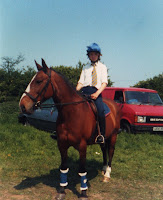 My sister on our horse Blaze.

Up until the point that I left home I had always shared a room with my little sister - 3 and a bit years my junior. In my teenage years my Dad made us some units so that we could effectively have a wall down the middle of our room to make our own bit of space. Sal and I had never really got on that well, the only thing we had in common really was our love of horses. Interesting once the units went up, I have very few memories of much communication with my sis at all. A wall obviously went up in more than one way.

Once I left home at 18 even though I was only about 5 miles away, I rarely went home. Working with the bank brought lots of new experiences. I got my first car and started travelling all over the place. I was sent over to our Norwich branch for several months, which meant staying in a hotel - I loved the independence and was quickly introduced to a lively night scene there! There were plenty of boyfriends until I met the man that I thought I was going to spend the rest of my life with.

I should have known better, but as they said love is blind. He was never really mine, he became the father to a baby boy at the time that we started going out, I was assured that the baby was the result of a fling with an old girlfriend, and I was happy to accept this. Three and a bit years later, he finally pulled the plug on the relationship even though by this time we had been living together for quite a while. My self-esteem had been completely eroded during this relationship. The feeling of being used and thrown away on a number of occassions throughout this time really had taken it's toll. I no longer felt that I had any friends that weren't 'his' friends, I had to find somewhere to live.

From somewhere (I now know this was from God), I managed to make several huge decisions at this time of such upheavel. I no longer wanted to work at the bank (this is where I had met him), it was also that time when interest rates started to go through the roof and so they was lots of redundancy talk in the air. So I made the decision to leave the bank, go back home to my parents (with their approval!) and start a course called 'access into higher education'.

My parents moved during this time and my sister had already completed her first year at Derby School of Occupational Therapy. She had already had several bouts of glandular fever and her health was really struggling with the stress of studying. I think I had already decided at this point that I wanted to follow her into Occupational Therapy but can vividly remember trying to keep my options open in those first few weeks of the access course.

This was definately a very defining moment in my life, it really was like restarting a life that had just got out of hand. From this point on I decided things really could only get better........