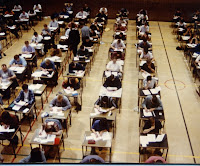 I got through school, always feeling that I wasn't achieving what I could but with absolutely no idea of how to do better. I suppose I was one of those children who behaved reasonably well (don't think I ever had even 1 detention!), muddled through classes without to much help needed and therefore never really caught anyones attention. I was a chatterbox and I do remember being told that I would achieve more if I stopped talking so much.

My brother was 2 school years ahead of me and he left school at 16 with a few CSE's and started an apprenticeship with a garage belonging to one of my parents friends. My mum had been made to leave school without any qualifications to work in an office where she gained shorthand and typing skills. My dad had left school as soon as he could and did an apprenticeship with British Rail working with wood in train carriages (back in the days when they were wooden).
I had no pressure put on me with regard to school by my parents and exceeded my teachers expectations by getting 7 good graded 'O' levels. Without any real guidance I stayed on in the sixth form taking Art, Economics and English Literature. I hated the sixth form, without any of the boundaries in normal school I would often go home and watch TV instead of attending classes (both my parents worked). If not at home I would hang around in the common room with the crowd, especially if there were boys about.

By this time in school I had a best friend and she decided to stop her 6th form studies after about a month to go to work in a house rental department. I very quickly followed and left after the first term to work as an office junior in a plastic bag making company in Derby. My parents had no objections (I always felt as though they were rather releived!), as long as I started to pay my way at home.

My brother left home when he was about 17 to live in a flat near my parents with his girlfriend of several years.

After a year as an office junior, having been to night school and learnt how to type very quickly (I lied at my interview for my job and they didn't give me a typing test!). Despite the job not being great, I loved earning money and having my independence. I learnt to drive, though didn't have a car for some years to come, I had a boyfriend who was really cute though it was very on off and my parents didn't approve. The relationship finished, I started to go out with my best friend once again and got introduced to the Nottingham 'Garage' scene. I used to spend a lot of time dress making when I was at home and shopping. A typical Saturday would involve me going into Nottingham to the market, picking up some fabric, going home and making a grovy new outfit and then going out in it at 11pm into Nottingham to finish off the day in a club.

It wasn't long until a new guy was on the scene, and spent very little time at home. I then got a job with First National Bank, a finance company in Nottingham. My wages tripled, and it wasn't long before I left home to live in a flat with my best friend Sally and another girl. We used to pay £40 a month each for our accommodation - which had no heating and was very damp, but it was cheap and away from our parents!!! Now the fun was just about to go to a whole new level!!
Posted by Jane D. at 16:04