My mum had a terrible start in life. She was born in Germany at the end of the 2nd world war. The result of a young German woman having a relationship with an English soldier who then returned to England without her. My mum never met her real father as far as I am aware. When mum was about 5 years old her mother developed cancer, there had already been at least two male figures in mums life at this point. By the time her mum was 6 years old her mot 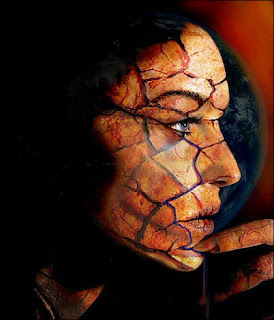 her was terminal and died, leaving my mum in the hands of a
terrible stepfather who was eventually put in prison for the way he treated her. I know from my dad that she was regularly locked in a dark, rat ridden cellar and given potato peelings to eat.

She was eventually adopted by her mothers sister who had already left Germany to live with her new husband in Canada. Her first ever flight was made by herself when she was about 7 years old to go and meet them. Life did not get any better. Her new father turned out to be a right tyrant, she was not allowed to speak German from the moment she stepped off the plane (though this was the only language she knew). Behind closed doors mum was treated as like a servant, not allowed to eat the same food, go out with friends, etc. At 13 years old this new family boarded a boat bound for England in the middle of the night without most of their belongings (there is a scandal to tell hear but I don't know the details).

Until she met my dad at 17 years old she suffered years of mental, physical and sexual abuse. She really does believe that my dad was her Knight in Shining Armour - and I can understand that.

I didn't find out any of this information until I was 17 years old and about to go and visit a relative in Canada by myself who my mum knew would tell me this story. At the time I was told I was horrified to discover that my Grandmother and Grandad were not really who I had thought they were (they were both still alive, my Grandmother still is today). It left me feeling very bitter towards everyone who I had thought that I knew.

I was sworn to secrecy, and told I was never to bring this topic up with anyone, however it does feel like a burden to carry it round, I have told people in the past but have always felt terrible for doing so. I am going to make a concerted effort to ask God regularly to take this burden away from me now, I know none of it was my fault and my knowing this information is not my fault either. However it affected me as a child and it is affecting me now as a mother - is it possible for me to truly hand it over and not allow it to do so? I do truly hope so.
Posted by Jane D. at 19:32