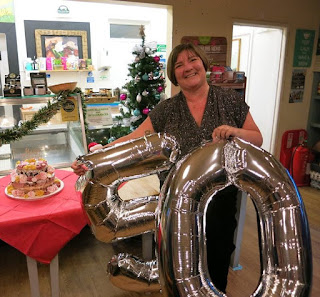 To say that the last 10 years has been eventful sounds dramatic, but I mean it, it really has been:

December 2008 we had to cancel my 40th birthday trip to Prague with my husband as we had my 36 year old sister's funeral the day after my birthday.

January 2009 we help move my (maternal side) grand-mother to the midlands and sell her house in Surrey.  She was moved into a home as her dementia was deteriorating after a brief physical illness.

May 2009 we took in my 12 year old niece to live with us as my parents could no longer manage her behaviour.  My children at the time were 8 and 9 1/2 years old.  Over the next two years there were legal implications that resulted from her father completely disowning her which led to tribunals and court cases.

July 2009 I had surgery on both of my knees (the result of my rheumatoid and oesteo arthritis).

January 2010 my 65 year old father had a stroke, he was at this time the main carer for my mother who was suffering from a complete mental breakdown following the death of my sister and not being able to manage her grand daughter.

March 2010 we finally started to get some mental health support for our niece as her school work and behaviour were all deteriorating very quickly.

April 2010 my father appeared to have physically recovered from his stroke however it left a significant cognitive impairment, which turned this incredibly laid back and un flustered man to become a persistent worrier.

September 2010 my Dad managed to convince my mum to downsize to a bigger house!!!!! (Why did we not question this move more).they were still in the same town in the midlands a little further away from my brother.  He was convinced that getting her out of a house that needed work doing to it and was full of memories of my sister would do her good.  It didn't.

February 2011 my niece made her first suicide attempt, we woke up to the sound of her being ill in the night and managed to find out what she had taken and get her to hospital in time.

May 2011 we could no longer manage my nieces behaviour and she was taken into the care of social services.  After several failed foster placements (some only managing 1 day) she was admitted to a psychiatric hospital. For the next two years she was in and out of various hospitals before being admitted long term to a unit 200 miles away from us. I also had to cope with her accusing my father of sexually abusing her (something she did later retract) but fractured my relationship with her and him non the less.

October 2011 my father unexpectedly died from an dissected aortic aneurysm. My mothers mental health deteriorated to the point of having to be hospitalised near us (she was staying with us at the time).

January 2012 we moved my mum into rented accommodation near us on the south coast.  She needed constant mental health service support over the proceeding year.

June 2012 I had to give up my part time job as I couldn't cope mentally or physically with home life demands.

January 2013 my mother succeeded in taking her own life.

2014 was quite uneventful except for the continued caring for my niece.  I was still the only person that kept in regular contact with her ( sometimes up to 4 phone calls a day from her mental health unit).

May 2015 we noticed that my youngest daughter was not eating much.  By the time we realised it was serious she was already dangerously under weight. We were immediately offered help which was difficult to accept at the beginning having had so many negative experiences with my niece.

September 2016 my daughter was admitted to a mental health eating disorder unit.  She stayed here for almost 6 months.

March 2017 my eldest child then 17 told me that they knew they were trans gender - I knew they were troubled but didn't realise this was the case.  We were asked not to tell anyone except the gp so that we could get a gender clinic referral.

May 2017 my youngest daughter was discharged and a week later started her GCSE exams at school. She managed to pass them all except one and was able to enrol into sixth form college.

September 2017 we were told by our vet that our dear dog Pippin was very ill and might just have weeks left not months.  We were so blessed to have her for another 9 months after this.

May 2018 our world was completely rocked to the core.  We discovered a deception that meant contact could no longer be kept with my niece. This story belongs to my youngest daughter if and when she decides to tell the world.
June 2018 my eldest daughter finally felt able to publicly transition to female, she had chosen her new name and was ready in her self to go forwards.  We also lost my darling dog, Pippin.

September 2018 we finally had  NHS appointment for my eldest at the gender clinic, we had already started on treatment privately and are still waiting on the NHS to take over this.

October 2018 my eldest daughter moved to York to start her degree course in maths.

Which takes us to my birthday this year, yes it was the big 50.  I had a lovely intimate party with just a few friends ( I don't cope well with big gatherings anymore).  I was totally spoilt rotten by friends and my small family.  We had got our puppy just a week before hand called Merry by my youngest  and my eldest daughter was home from university (which she is loving).

I felt very much that God was saying it was time to put this decade behind me.  Within a week of my 50's my youngest daughter was accepted into a London music conservatoire to study saxophone performance.  She also got a distinction in her Grade 8 exam.  To top even that we then found she had been awarded a reasonably substantial scholarship which would help to fund a London placement!

So I am excited about 2019, I am learning to leave the feeling of dread of what will come next behind me.  There is still a long way to go for healing for all four of us but it actually now feels as though this healing is attainable and there actually might be a time of great blessing from all these bad times.
Posted by Jane D. at 18:27 3 comments: