We have had a horrible 10 days in our house.  My dear daddy died very suddenly from an aortic aneurysm on the 7th October aged 66 years old.  I live 140 miles away and had no chance to say good bye.  Yesterday was his funeral and here is a copy of the eulogy that I wrote for my husband to read out at the crematorium.  My way of saying good bye.

Colin Richard Budworth was born on the 12th June 1945. The youngest of 4 children to Ada and Stan Budworth.

Derbyshire born and Derbyshire bred, thick in the arm but most definitely not in the head.  We have loved listening to Dad’s tales of his adventures as a boy helping his Dad out with jobs, singing in the church choir and listening to the Goon show with his brother, sharing an ear piece to listen while they were in bed.

As a young man he took on his apprenticeship with the railway with all seriousness.  He still knew how to take time out to enjoy himself though, going camping in the dales with friends and even a holiday trip abroad in his first little van with a friend.

Then of course there was  that fate filled holiday he took with his friend Ken to the Isle of Wight – Ventnor to be exact.  I now know that it was most definitely love at first sight.  How do I know this, not because mum has told me but because I have had the great honour of being allowed to read the love letters that he started to write on the train home from that holiday to my 16 year old mum.  This was the summer of 63.  By the spring of 64 mum moved up from Kingston upon Thames to Derby to be just a few doors away from his home.  That is when the written letters stopped but when the love story had really only just started.

Dad finished his apprenticeship, they got married and the world was their oyster.  In fact they actually got married and then he finished his apprenticeship, even though Dad’s mum wrote a very loving letter to mum saying that they should really wait until afterwards.  At 19 and 18 they grew into being adults together.   Right to the end my dad adored my mum and  I am sure you all know that the feeling was absolutely mutely.  46 years of marriage might sound a lot but I know my mum would have loved to have had a little more time.

You all know that dad was an absolute master craftsman, a cabinet maker extraordinaire.  His creations have adorned the homes of members of the Beetles been sold in shops as grand as Harrods, and adorned stately homes.  It might have taken my mum 17 years to get her coffee table from him, but boy was it worth waiting for.

Another thing you might not realise is that my dad was a pioneer.  This is on a subject that is now written about, talked about on the radio and generally accepted as a basic need for all men.  What is this thing you might think – His Shed.  As kids once home from his day job, he would disappear off into his shed for a couple of hours before tea.  If anyone telephoned, you said he was in the shed and that was that.  If anyone came to see him, they knew they would have to go and talk to him in his shed.  Of course dad was not disappearing into his shed to just get away from it all, as the modern notion now takes you, he was working.  This was not just to keep mum, john me and Sally, but also to help fulfil his dream of having his own business – even if he didn’t realise this at the time.  It was one of the many occasions that mum managed to cajole him into doing what he really wanted to do.  My memories of my dad working away in his workshop will stay with me forever, never was there a happier man than my dad in his workshop in Shardlow.

There has been too much heart ache this last few years.  Dad’s stroke 18 months ago was an indicator to us of how much strain he had been under.  However nothing has prepared us for him leaving us so quickly.  We have some comfort in knowing that he died painlessly and peacefully but it does not stop our hearts from breaking at the thought of continuing in life without him.

But continue we will because we know that is what he would have liked to see, he would be so proud of how mum is coping so far.  It is also a comfort to know that his five grandchildren have all had the opportunity to get to know their grandpa and they will treasure their memories as we do ours.

I hope you are all able to treasure your memories from all the different parts of dads life that brought you into contact with each other.  He was and is and always will  be a remarkable, one in a million to us.
Posted by Jane D. at 11:27 1 comment: We have been having a couple of quiet weeks at home for a change.  My counselling has started - now I knew that would be hard work but hadn't quite expected it to be as hard as it is!

I have been quietly crafting, doing a little crochet, a bit of beading and a little more crochet.  Work has been busy so I have been saying 'no' to a lot of social invitations.  My energy levels are still very low and my mood up and down like a yo yo but we are quiet.

My niece has been in touch by email, so we now know where she is, this has taken some stress away.  She sounds happyish and I am sure we will go and see her, however we are not rushing.

We have been experiencing some extraordinary weather this last week which we have managed to take advantage of.  My other half and I went and spent a most luxurious 3 hours by the sea while the children were at school last week.  That is where the photo at the top of the page was taken.  When we got there we had the beach to ourselves: 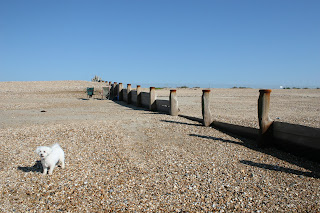 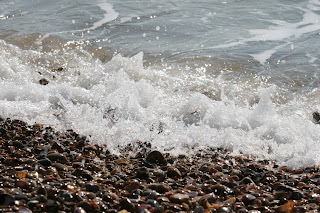 The tide slowly moved in, we even had to move twice! 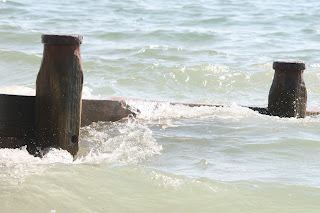 I found it totally mesmerising. 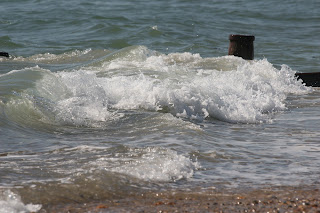 And I think my puppy dog had fun to - she does like to find a feather! 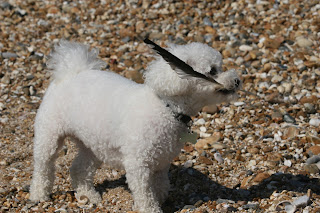