There seems to be something decidedly middle aged about getting excited about a shed. This is the shed that my husband and I promised each other for our 13th wedding anniversary last week. (Though he cheated and got me the most fantastic picture).


When my dad brought my niece down t0 us last weekend, he helped me to decide which was the best (and cheapest) for me to purchase. A few days later I had the conversation with my husband and we decided on the size and I bought it on-line. To pay someone to erect it would have cost more than the shed again so we decided we would have a go ourselves.

Now it has to be said, I love flat pack furniture, I get a great buzz out of making it and can usually do it despite the weak joints. I was not however terribly confident about getting a cheap shed together.


It arrived a couple of days later last Friday and with the children all very keen to help we decided to start it when my husband came home from work later that afternoon. First we set about painting the side that was going to be up against the fence. 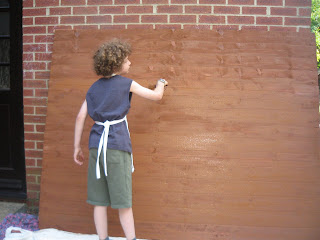 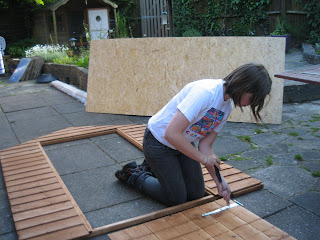 While this was being done we got the door fitted in (though it had to be taken off again and refitted once we had erected it - bah!). 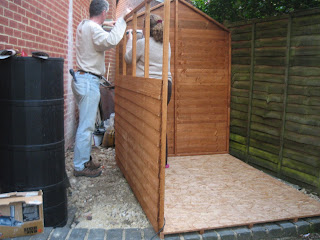 Then the excitement began of putting it together. 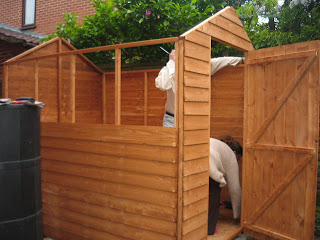 By 7.30pm we had got this far and though we couldn't shut the door it was starting to look like a shed. 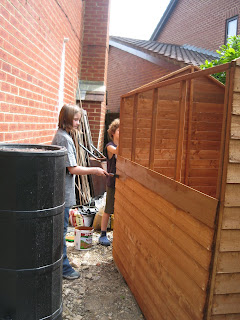 Saturday my husband was working an early shift, so I devised an extra pocket money option for the children and they all took part in painting the rest of the shed. While I refitted the door and started to cut the glazing (they had delivered the wrong size and thought it would be quicker to just cut it myself than wait for new stuff). 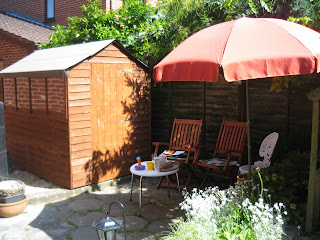 As we were out for the afternoon and evening on Saturday we down tooled, but took them up again Sunday morning (we skived on church - naughty naughty) to get the roof on. Rain was forecast for Monday so I was quite keen to get this done. It is not quite finished just have the facings to put on the roof at the front and back but it is up, stable and water tight.


We managed to get all this done with hardly a strong word said - no easy thing for darling husband and I when it comes to DIY. I am hoping that this is further testament for us both that the extra effort we are putting into communicating with each other through the challenges we are presently facing, is well worth it - horrah!
Posted by Jane D. at 10:55