It's been a very busy week, so nothing on the blogging front and I've missed it! Still not got much brain left for creativity, but I have been working on something for a few weeks and as the last part was obtained yesterday I thought I would share it.
Last year, about February time, we had my step mother in law coming for a visit. About a week before she came I realised I still had a packet of Aliums that she had brought me the previous year and I had never got round to planting. I hastily planted them thinking they would probably now amount to nothing (I was rather cross myself). Despite my first small step (the only thing I had to do was plant them!), they flowered just a few months later though they were very small. 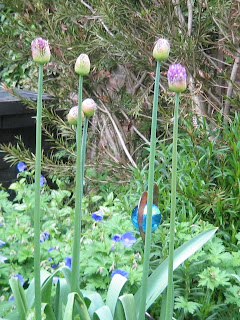 This year they are absolutely lovely, I am so pleased with them. I was so excited when I saw how many flower heads had appeared. When they first started to open I decided to try and capture them coming out in all their glory. 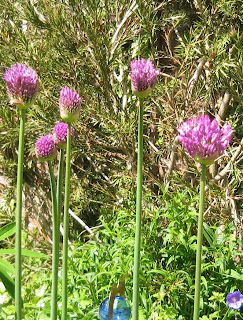 I was surprised how long it took them to open a little more. The photos aren't great I'm afraid they were taken on our little snappy camera which does not have a terribly good zoom.
Just yesterday, after a really good Spring week (lots of sunshine and showers!) I asked my husband to take this picture on his superduper camera - I could not believe how many bees were covering them! 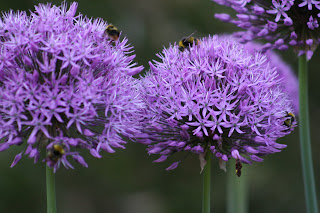 As I start a potential minefield of a week, I'm praying that I might have the patience to sit back and let things take their course. God knows how beautiful my situation could become and I will trust him to make it bloom in it's own time, knowing that I will be able to sit back and admire the achievements that have occurred because of my first small steps.
Posted by Jane D. at 19:01