Our journey into becoming kinship carers - Part one - In the beginning. 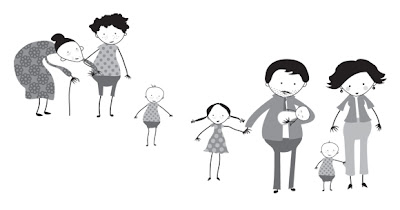 Have you ever heard of Kinship caring - until this year I hadn't!

This blog that I wrote back in July last year describes why my neice came to stay with us.  As my journey into Kinship caring has progressed though I have come to realise just how little help and support is easily available to people like myself even from the professionals that are 'supposed' to know.

One major concern was finances, my sister had lived on benefits so there was no income to support raising her daughter.  My parents having looked after her full time between her 3rd to 5th birthdays and again from September 2008 to May 2009 had only been receiving her child benefit and a very small monthly sum from what was the child support agency which they took out of the fathers wages.  The total amount each month was approximately £150.00.

Another big concern was the emotional support that we were all going to need.  We had always spent a lot of time with my sister and my neice despite them living 150 miles away.  However death and grief blow all 'normality' away.  There had been some major disruptions that my neice had caused at my parents which involved the social services child protection scheme becoming involved.  My neice wanted to come and stay with us and was trying to make it impossible for her to stay at my parents not realising (at 11 years old you do not think much about repercussions I think) she was risking any chance of coming to be with us.

Not knowing that we would be able to get any help at all I first of all set about looking at how we would get a school place for her, after a week of trying one particular school who kept passing me back to the local education authority (who then kept sending me back to the school), my husband phoned our nearest secondary school and made good contact immediately. (I had tried another one first as my neice would have known a pupil in her year there).  I followed this up and within 2 days a trial had been set up to start the week before 1/2 term in May and for the week after  1/2 term.  So that was that - we had a 3 week trial period for her to come and 'test' the waters to see what living with us would be really like (as opposed to just spending holidays with us).  It would also give my two children then age just 8 and 9 yrs a chance to see what it would be like as well.

Now the trial was set I needed to be able to address those two big concerns, I set about an internet search of what help would be available to us.  Bearing in mind I had never at this point heard of the phrase kinship care (so couldn't google it!), I eventually found this on our local councils website when I saw the description of a kinship carer I almost cried:

"Kinship Care means that the family make arrangements for the child to be looked after by a close relative and so the child does not need to come into care".

"Hampshire Children's Services Department are able to support and help Kinship Carers in most situations where the Department has been involved with the child and the family."

It felt like Christmas everything I needed.  However as often seems to be the way the reality was very different.  I telephoned the person on the site and was told that actually what I needed to do was to ring the general enquiries number for people requesting social services help and they would be the ones to decide whether or not I should be assessed!

So I rang and gave them a very brief outline of our situation.  That all seemed simple enough (although very emotional, it was not an easy story for me to have to retell a stranger on the end of the phone), now I had to wait and was told that someone would ring me within 2 weeks to let me know whether I would get a further assessment or not.

Four weeks later after much chasing from me and the lady who I had first spoken to (whose name was on the website) I finally got a phone call from a social worker while I was at work one morning.  (I was now a week away from the trial starting).  When I reconfirmed the details that I had already given I was simply told that I didn't really need any social services intervention as my parents already had an residency order for my neice and so we just needed to get a solicitor and change it to us - that was it.  I just sat there in disbelief and burst into tears.  I then had to start divulging very personal information on the state of my mothers health and the social services intervention that had already taken place in great detail to this complete stranger on the end of the telephone.  After doing this she changed her mind and said maybe we would benefit from having an initial assessment!

That assessment was actually with the social worker that I had spoken to on the phone and within 30 minutes of meeting us all confirmed that she would be taking on my neices case immediately and wanted to come and see her again alone the following Monday (this was Friday).

The door was still not open for us to be officially taking on the kinship caring role in the councils sight, which obviously meant still not guarantee of any financial help, but at least emotional help was starting for my neice at least.

The process of going through the school system, doing all the varied social services reports and getting to where we are today - 2 months off from our first anniversary all together goes on, I shall blog on part two next week.

If you know anyone else who is a kinship carer I would love to make contact with them.  There is a fabulous facebook group that you can find here , you have to request to join but I have found the ladies there to be so friendly and extreemley pro-active in supporting people on their kinship journeys.  There is also another group called the Family Rights Group . They appear to have a very broad range of reading material available though have only just found them so cannot say much more.
Posted by Jane D. at 13:30