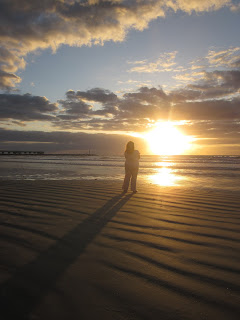 We were in a bit of a quandry about what to do on Easter Sunday morning.  It is such a special time of celebration for Christians, that being on holiday was not a good enough reason to let it pass by.  None of us fancied trying to find a church, I didn't want to be going to a theme park.

In the quiet I felt the prompt of His Holy Spirit to go and see the sunrise over the Atlantic ocean, something that is not possible in the UK.  We had planned to go to the Kennedy Space Centre at some point and as that is by the coast a plan came together.  My dear husband did a search on the map to find a good place to go.  We ended up at Jetty Park and when we arrived we noticed there were lots of people despite the very early hour.  It just so happened that the local church were having an outdoor sunrise service.  The beach was big enough to accommodate everyone with some personal space, the added bonus of worship songs playing was fab.

It has been quite difficult to get into Holy Week, away from home and friends. However being forced to rethink and spend time alone with God has been great.

What I was not expecting while reflecting on the glory of the sunrise I was watching in the photo above,  considering that morning when Mary went to the tomb was the shadow of grief that passed over me.

Grief is a funny old thing.  As time passes you get used to the fact that the world is different when wearing grief glasses, you get used to that being the normal.  However I now seem to going through a new phase of grief shadows.  I don't know how long they are going to keep me, sometimes they are long  and sometimes they are short.  This Easter Sunday it was thankfully short, though the intensity of loss was deep.  So much has changed since last Easter, important people in my life are now missing.

The tears that flowed so freely were so welcome that morning, being on holiday has been stirring lots of memories and emotions but the release of tears had not come.  Praise Jesus for the freedom and release he gave us by his ressurection.