We got back home 4 days ago and I am afraid I am still suffering terribly with jet lag.  We have had three weeks in Florida, just the four of us.  It has been a great family bonding experience after all the upsets of the last 3 1/2 years.  It felt very decadent to be in such a large villa (one husband and I stayed in years ago before we had children with friends) by ourselves.  However God knew what we needed and he provided it!

I have been ruminating about how write about it when we did so much so have decided to do it in the form of reviews of the various places we went.  There were only two parks that we went to and only spent one day at each these were Discovery Cove and Seaworld.  The rest we dipped in and out of over several days (and for some, weeks).  I thought I would start today with Epcot.  This was the first place we visited at the request of the children.  We had arrived very late on the Saturday night, spent Sunday stocking the cupboards and swimming in the pool and by the late afternoon were ready to go and start investigating Walt Disney World.

EPCOT
You can find a map of the Epcot park here. 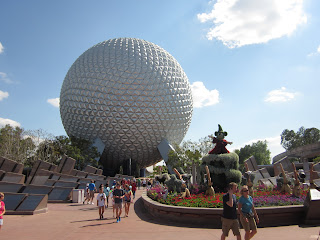 This ride takes you on a steady tram ride round and round the inside of the ball with a display of videos and animatronic tableaux giving a brief history of the world, from the big bang to cavemen, to Egyptians, to the first books, radio, film, computers until you finally reach the top of the ball where you get an amazing sight (not going to spoil it for those that have not been).  There is then a slow descent back which is done backwards, to keep you entertained they now have a touch screen video in each little 2 seater car where you can explore what the earth might be like in the future.  This was great fun and very much a favourite thing of my 11 year old daughters.

Around this area are several innovations areas which have all sorts of computer games and learning experiences which are great fun when it was not to busy.  We did come across on our final visit to this park an area where you could build your own roller coaster and then get into a simulator and ride it - this looked incredible and we wished we had found it earlier, as the queue was too long.

To get around queueing when we were in the Disney parks for more than a couple of hours, fast passes were brilliant.  These enabled you to get an hour slot when you could by pass the main queues (some of which were 2 hours long!) and do your ride with very little queueing. 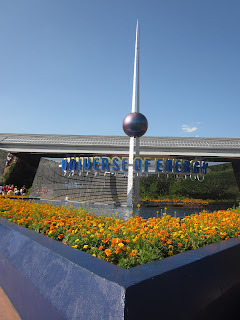 We were pleased to find Ellens Energy Adventure still there, this is another very low thrill tram ride and I am amazed at how much the children learnt about energy.

The world showcase takes up more than half of the parks site and is situated all the way round the big lake.  You go from country to country getting a taste of building and life styles.  Most of the countries had restaurants in them (and shops, lots of shops).  A few had rides or shows, we didn't go into them all but had a good walk around the whole area.
This is Germany. 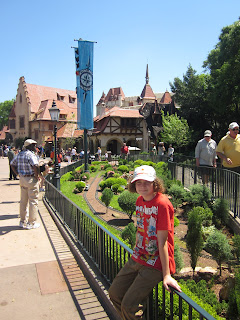 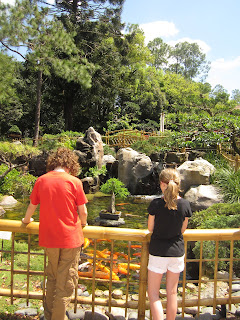 There were several other areas that we looked at - Living with the Land is an area where lots of scientific work is being done on genetically modifying plants to grow in certain ways as well as using different growing materials such as hydroponics.  My son was not that impressed especially as the ride that took you gently around the whole area was on a boat, the irony of it not being land was just too much for him.  We had hoped to book a table at the Garden Grill restaurant here as we had very fond memories of visiting it 14 years ago.  Sadly we could not get a table even 3 days in advance at a time that suited us.  However this did mean that we got to eat at the canteen style restaurant in this area that still used fresh food grown on site.  We were so pleased to find this gem, not only were the prices far more affordable than the main restaurant but it also had a huge vegetarian choice, I had vegi sushi, my husband a Moroccan vegi filled wrap, my son a sort of tapas and my daughter stuck with an egg salad - all were satisfied.

This area also included the Soarin' ride.  This was fantastic, you sat in rows rather like being suspended in a seat under a hand glider and were then rotated and raised so that you were in front of a huge video screen flying over California, this was definitely one of my favourites.

Another area was all about space, here you found the mission space ride 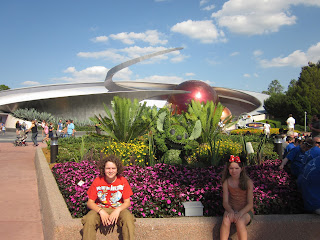 I know lots of facts about this ride due to my son swallowing a guide book while we were away, it was fascinating learning the history of the rides but I will not try and bore you with it all now.  This ride split in two you could go on a green ride or an orange ride, we opted for green to start with.  You were directed into little 4 seater capsules which felt very much like you were in a space ship before the screen in front  of you took you on a launch and trip through space before landing.  It was a very confined space and dark but the simulation was quite gentle and we loved pressing all the buttons (which were just for playing with :o).  My husband and son then went on the orange ride and reported back that it was just the same except it spun you round a bit as well when you were taking off.  This did not sound too bad - so my daughter and I thought we would give it a go. Big Mistake, I ended up feeling very ill as the G-force the spinning caused was horrendous! 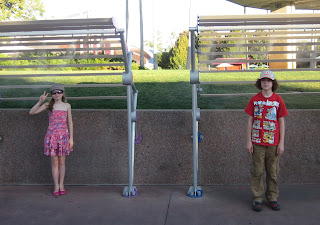 Having had previous experience of the parks we knew to take our own food in with us, when we could and although it is only Spring the temperatures were well in the 80's most of the time and having cool spray stops like the one above were very welcome.

Other adventures we enjoyed in this park were:

Maelstrom - a very small log fume type ride in Norway where the trolls tell you to 'Go Back' and so you do.

Reflections of China - a 360 degree cinema taking you around the Great wall of China and other areas in China.

Test Track - this ride is brilliant and we finally got my daughter on it on the last day, hubby managed to film this little bit of her enjoying a 60 mile an hour test on the track - a great family ride:


The seas with Nemo and friends - another very gentle family ride watching Nemo and friends having an adventure, ending with very clever cartoons being shown on the front of a real aquarium.

Turtle Talk with Crush - it took some persuading the children to go on this as it looked very much for little children, I had to confess I was a little apprehensive as well.  However it turned out to be so much fun.  You get deposited into a human tank and a Crush the surfer dude sea turtle from Nemo comes and has a chat with you.  He is a cartoon but he is working in real time, asking questions of real people in the audience.  The answers to the questions were responded to individually and then the children were invited to ask their own questions of Crush.  The facial expressions and funny answers that Crush gave made it absolutely hilarious as well as technically very very clever.

The first and second to last night we spent watching the amazing fireworks.  To get a great place around the lake to watch them,  I sat and kept a space while husband took the children off to do things for another hour. 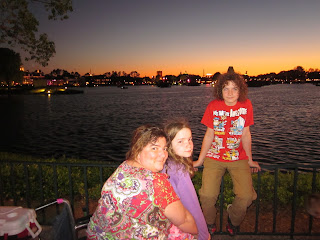 The wait was well worth it. 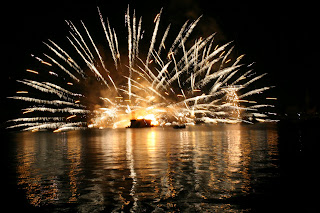 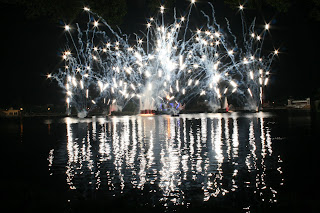