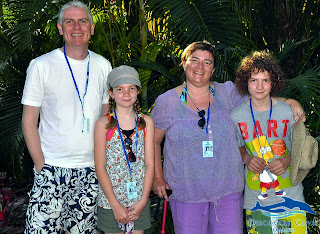 At the end of March it was my daughter's 11th birthday.  We booked our long trip to Florida purposely to fall over her birthday as this was the first one she was going to have by herself for some years.  Until  May last year we had my niece living with us who turned 15 years old on the same day.  Wasn't that clever of my sister and I to both have our baby girls on the same day!  After all the trauma of particularly this last year, this birthday needed to be different.  I ensured that my niece would be getting a good day with at least one visitor back at home.

We booked the holiday back in August last year.  The idea for what we did to celebrate this birthday did not come together until just a month before we went.  My mother gave us a special monetary gift just at the time when we were trying to decide whether we could afford to do this special thing or not.  When we told her about it, she was delighted that the gift would go towards it.  So what did we do?  We swam with dolphins.

Discover Cove opened in 2001.  I have heard lots of very mixed reports about it.  The cost is one thing people always comment on, it is very expensive, however being there convinced me that the money is being spent well.  Keeping the dolphins working and captive is another report I had heard, however many of their 44 dolphins have either be born there or are rescued from other zoos/parks/rescue centres.  Back in 1998 my husband and I swam with dolphins in the Florida Keys and we knew this experience would not be the same as that.  This was part of the reason why we did not try and repeat that experience, we swam in very deep water, snorkeling to keep up with the dolphins, which would have been far to difficult for an 11 year old.  So what did our experience consist of.......

All food and drink for the day is included in the package, it is all buffet style and there was plenty of choice (even for us fussy vegetarians!).  We therefore arrived at 8am ready for breakfast, we had to queue for a while to get our photo passes completed and our time for our dolphin experience to be booked in.  Then straight to the restaurant to eat pastries, french toast, cereal, yoghurt and fruit.

Our time with the dolphins was to be around 12.30pm, so we found a nice shady spot and made up a little camp for the day with some chairs and sun loungers.  Then it was time to go and get changed and measured up with either a wet suit or vest for the day.  I opted for the vest (the easiest to wear by far), but I encouraged the others to wear wetsuits as this gave them good coverage to protect from the sun which we would be in all day.  We picked up our little bags, containing snorkel, mask and dolphin friendly suncream and we were all set. 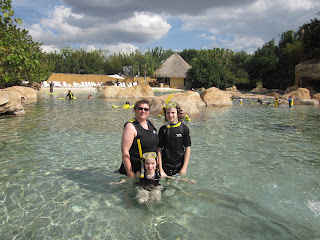 There is a large lazy river/reef that goes around the park.  This is shallow enough for fun snorkeling for the children and challenging enough with deep areas in the river to stretch their swimming skills (though floats are available).  It was a lovely 30 degrees temperature (the same as our pool at the villa) and was terribly inviting.  The children spent most of their day in here, no wave machines, or slides, just snorkeling fun. 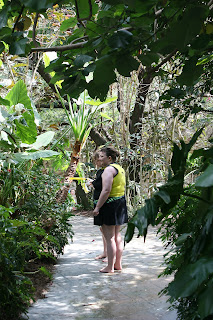 There was also a beautiful aviary area, with lots and lots of very unusual birds, there were pots of food available and we saw many people with birds on their hands having their lunch.  I watched mesmerised by one very small bird that managed to eventually get through a whole grape which was probably bigger than it's head!  My husband managed to catch this wonderful peacock in all his glory: 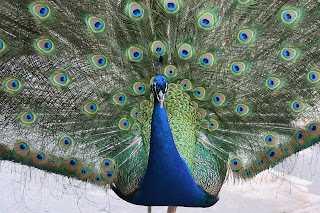 The drinks,slushies, icecreams and snacks that were on offer kept us well topped up so that we decided we would have a late lunch after our dolphin experience.  We had been watching other people having their experience and so the children particularly could see exactly what they were going to be doing.  We were given an allocated time to go to a particular area where we had to sign disclaimers and watch a safety video.  This briefing was very well done and I was most impressed with their care for the animals.  One large family in our group had their time delayed because one of their allocated dolphins had gone to sleep!

We were paired with another family of four and led to our area in the large lagoon.  The trainers were very knowledgeable and we were able to ask all sorts of questions.  The dolphins were gently introduced to us by swimming along in front of us all and we were encouraged to put our hands out to stroke them.  We were in water that was waist/chest deep on the children, it has to be said it was very cold even with wetsuits on, this is obviously what is necessary to keep the animals happy.

We were then given the opportunity to watch the dolphins do a few movements and to give them instructions on how to do some as well (like splashing us all).  There was then the chance to give one of our dolphins a kiss, we had an older one and a teenager swimming with us, the teenager did the fin pull swim with us, while the older one lay on his back letting us rub his tummy!

Here are a few more pictures: 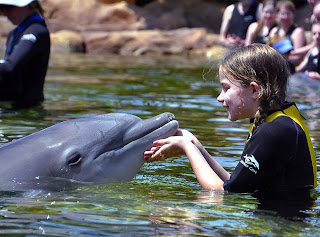 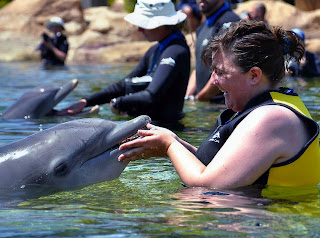 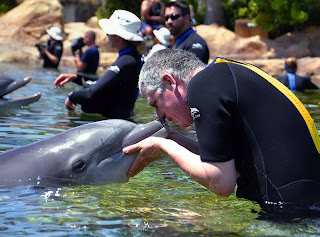 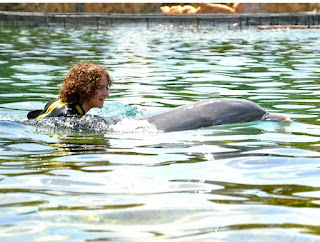 There was also another lagoon full of fish and rays, I didn't go in here, swimming with fish is not my idea of fun, no idea why dolphins is okay and little fish not but there you go.  My son and husband went and swam in here and said the experience of gliding above rays whose fins stretched out as wide as their arms was amazing.

This is not the sort of treat that we would try and do again soon,  I hope one day when the children are older they might like to either go and do this again or do the experience that we did down in the Florida Keys.  For the healing and memory making experience we wanted this to be - it far succeeded all we could have imagined. 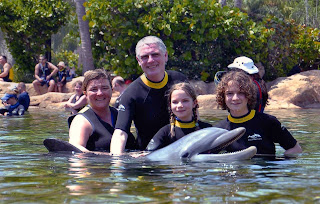