Money has been a little tighter since I made the decision to stop working for 6 months, with a little more time on my hands, this meant I could actually make some Christmas presents - something I have always wanted to do, but only ever managed the odd present here and there. 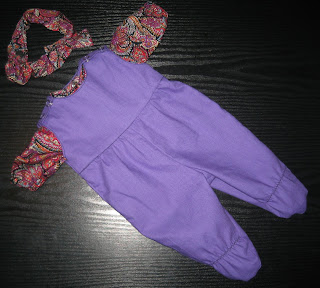 This outfit was made for one of my God daughters 'Baby Annabel' dolly.  I used fabric from my 'store' which I have to say is not very large anymore since I did a big clearout earlier in the year.  Thankfully these bits sort of go together and I am quite pleased with the results.  I use an electric sewing machine and even the poppers for the shoulders and the elastic in the headband were from my 'store'.  It took me about a day in all to complete it, though was doing lots of other things as well. 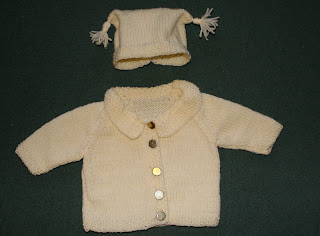 This small outfit was for another of my God daughters.  She had been to stay overnight for the first time this year and Bear had come along with her.  We chatted quite a lot about Bear and I asked if he had any clothes.  The answer was no, so I asked if she might like to have some for him to which she said yes, so she decided that a coat and hat would be a good place to start as he might get chilly in the winter.  The ball of wool cost me £1.99 and it took me several evenings to complete. 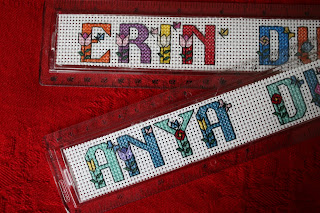 These cross stitched rulers were my first venture back to cross stitch in a very long time.  In my late teens and early twenties I used to do loads and have several large pictures that I did for myself as well as several family members having some as well.  I brought the rulers (which have a removable top so that you can insert the fabric) last year when they were on sale for £3.50 each, I made 3 altogether, these two are for two of my nieces.  'I also made one for a young lad, with his the letters of his name made us with 'stuff' that he likes (trains, cornet, football, etc).  Each one took me about a week of evenings. 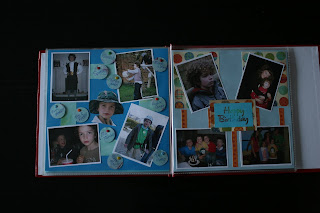 This scrap book was for my son, it is the first time I have attempted to do one, having yearned to for quite some time.  The album cost me £2.99 and included 20 plastic leaves in it.  I then spent about £10 on nice card, paper and stickers to help create it.  I was also able to use lots of bits that I already had.  I buy photo paper in bulk, so had plenty of that.  I also do a lot of card making and so have lots of stamps,  cutters and other crafty bits that helped to make each page unique.  This wasn't the cheapest present to make but I felt well worth the effort and love the fact that my son has found a 'secret' place in his bedroom where he keeps it (I've no idea where that is!).

I was also able to make several bracelets for other God children, friends and family members, I didn't get any pictures of these but did blog on them some time ago you can see the post here.  All the bracelets were made with materials I already had.

So I have to say I am rather proud of how much I got made and the fact that I used mostly bits that I had in my cupboards!  I started in October - maybe this year, I might get myself organised to start even earlier and might get even more done.
Posted by Jane D. at 13:08