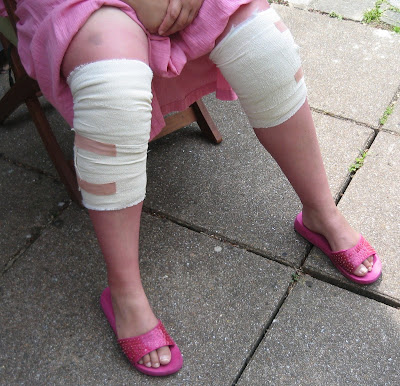 My knees have been really dodgy for about a year. I had presumed it was my rheumatoid arthritis but after visits to my consultant, MRI scans, it turns out I have osteoarthritis in them as well (same as my ankles and spine - lucky me!). The only solution that was likely to bring any improvement was surgery. As they have been bad enough to really restrict my walking up/down stairs and hills for the last 6 months+ and I have not been able to ride my bike I decided that I would have surgery. This has taken an awful long time to come round. As you will see from the photograph though - it is now done. I opted to have both knees done at the same time as it would have just been too inconvenient to go through it all twice. The surgery was keyhole to wash out the joints and to smooth off the cartilage around the bone that had gotten too rough, causing the pain. Surprisingly I managed to have it done as day surgery (I never usually manage to get things to go to plan), I was second on the list and so was wheeled down to theatre about 10.30 back on the ward for 12.30 and home about 4.30! I have a whole rigmarole to go through now including having to wear tubigrip through a heat wave from Thursday - aghhhh. Hopefully though in a couple of months time I should be bouncing around for the first time in quite a while.
Posted by Jane D. at 17:06

Email ThisBlogThis!Share to TwitterShare to FacebookShare to Pinterest
Labels: Health