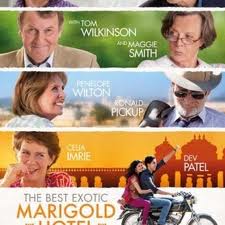 I had a lovely evening out with a great friend last night.  We went and had a meal together and then went to the cinema to see The Best Exotic Marigold Hotel.  I saw a trailer for it during half term and was drawn to it's cast of the best British actors, knowing that there are no films containing them that I have not enjoyed.

What I had not realised was how much the story was a reflection by older people on the lives of older people.  Each of the characters had their own story to tell which we were introduced to in the first 15 minutes or so of the film.  They then all end up going to India to a 'retirement' complex which they find is not finished.  I sort of expected the story to take the line of how the business was then made, however that was not the point of the story at all.  This was a really fresh way of looking at ageing for me, we so often here about younger generations not understanding or even 'liking' the older generations.  To see older characters struggling with their own views of what is expected of them as they get older was very insightful.   I will not say anymore as I would encourage everyone to watch it as God willing we might all experience getting 'old' at some point.
Posted by Jane D. at 13:18