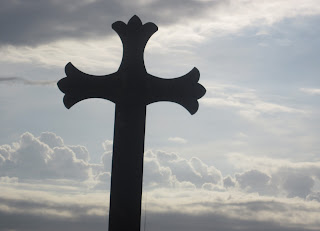 Photo taken by my 10 year old daughter in Barcelona 2 weeks ago.

The turmoil still rages around me and my family this week.  Dad's sudden death 4 weeks ago tomorrow seems to have been pushed away in my thoughts as meetings have taken place this week both for my niece and for my mum.

My niece is now under a court order to be retained in a secure unit for adolescents.  It's an unusual step for the authorities to take but as she is not classed as having a mental illness (she is just very damaged by her upbringing) it is the only way they can keep her safe.  Outside of being secure she is very likely to continue running away from any residence she is placed in and self harming to the extent that she needs hospital treatment.  My husband and I are now the only people that she has contact with and she is using the power that gives her.  This week we travelled over 2 hours to go and see her and whilst she allowed us to be in one meeting, the more important one she chose to not have us present.  This hurts, though I realise we were the only people not being paid to be at the meeting and the only people she could really exclude.  I am now praying over the next steps to take, she hasn't called us since that meeting whereas she had been calling every night up until then for a couple of weeks.

My mum is still in the throws of her nervous breakdown, she is hallucinating and very very paranoid.  It is very difficult to cope with visiting her, seeing her being really nasty to the staff trying to help her.  She has been in hospital for almost a week now and it is going to take some time for the medication to start working for her.

But there has been moments of light as well.  My wonderful husband took myself and a great friend to a music concert the other night.  This was made even more special my the artist (Thomas Dolby) coming into the small independent restaurant that we were eating in to eat himself before the show.  And yes husband did have to go and have a few words :o).  I have had contact from some lovely friends and extended family that I haven't been in touch with for a very very long time.  Knowing so many people at church as well as my friends and family are praying is really helping.

One conversation I had with my Fairy Godmother (also known as my Christian mum as she has nursed and nourished me with scripture since I first became a Christian) told me to look at 2 Chronicles 20 during our conversation.  Particularly these verses:


15 He said: “Listen, King Jehoshaphat and all who live in Judah and Jerusalem! This is what the LORD says to you: ‘Do not be afraid or discouraged because of this vast army. For the battle is not yours, but God’s. 16 Tomorrow march down against them. They will be climbing up by the Pass of Ziz, and you will find them at the end of the gorge in the Desert of Jeruel. 17 You will not have to fight this battle. Take up your positions; stand firm and see the deliverance the LORD will give you, Judah and Jerusalem. Do not be afraid; do not be discouraged. Go out to face them tomorrow, and the LORD will be with you.’”

It is an amazing thing that I have been looking at promises in the bible for a craft project and a work activity day that I am preparing for.  This has taken me into the theology of looking at the promises made in the Bible for ALL people and those that were given to specific people.  However it made me realise through the conversation I had which brought up these verses that God still wants us to listen and learn from the promises that he has made to other people.

So these words that were given to King Jehosphapat are remaining my comfort this week.  They are keeping me going, standing firm.  It is so very reassuring that by doing nothing other than my ordinary stuff I may just see the deliverance of the Lord as Jehosphapat did.  I can only pray that I don't continue to fall like he did as well!
Posted by Jane D. at 10:10