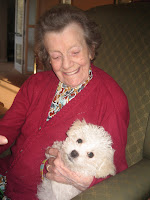 Well I got to 16 days of a new year before anything too negative has happened.  I am now trying to see the new negative as a positive.  Yesterday afternoon I had to go and tell my mother that her mother had died.  She was 92 years old and had been in a state of severe dementia living in a nursing home for the last 3 years.


It was not totally unexpected (92 years is a very good innings).  Personally it is something I have to confess I have been praying to happen for a while.  In one of my very early posts to this blog which you can find here is a very brief sketch of my mums early life.  Over the last three years I have heard more stories and know more facts about the life she had with her the Aunt and Uncle that adopted her.  It is not nice stuff, in fact I can not recall a single 'nice' thing that I have been told.

Mum has often said to me that she would not shed any tears when her mum went.  She didn't when her 'father' died back in 1992.  His funeral was very swift and brief attended only by my mum and her 'mother', no words, no flowers.

However I was still very nervous about delivering the news last night.  My mum was discharged last week from a local (to me) psychiatric unit after a 10 week stay preceded by a breakdown immediately after my father died back in October.  She got the keys to a lovely little detached bungalow last Wednesday.  She is renting it for 6 months to see how she feels about living in the south of England as opposed to the east midlands where she has been for the last 44 years.  Last Sunday my brother brought down most of her possessions from her old house and we spent the day setting up her new one.  There were some tears, it felt odd, a bit like bringing Dad down too (he had made most of the furniture).

You might now see where my nerves were coming from.  Mum is still very fragile, we sat for a couple of hours, not saying much.  Just a few bitter and angry words.  I have spoken with her this morning and she says she was able to sleep last night.  I knew that the coming few weeks were going to be testing for her before yesterdays events happened.  Your prayers for her, my brother and me would be much appreciated.
Posted by Jane D. at 10:00