Dear Sis - letter number one (I have a feeling there might be more). 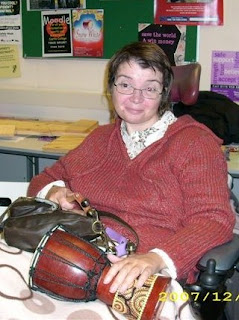 I can't believe it is more than 2 years since we last had a conversation.  I know we communicated a tiny bit while you were in hospital those last 3 weeks before you died, but I have to admit that it wasn't really much of a conversation!

I have just been reading Dawn French's book 'Dear Fatty' in which she writes letters to all the people who she feels have played a major part in her life.  Lots of them are to her Dad who died when she was 18, which got me thinking maybe that would be a good way to try and get my thoughts down for you - and for your daughter.

'A' lasted for 6 months at Mum and Dads after you left us (sorry that is just how it feels sometimes, but I realise that this makes it sound as though you chose it and I don't know whether you did or not).  I know it was all part of the hurting process that she was going through but she really did make her point in very dramatic style!  I also think her then new school made a lot of mistakes, with no-one having a clue how to help a child like her.  I can see you raising your eyebrows at that - how many times did you face people who didn't have a clue!

Do you feel cheated dying just at a point where you were starting to do things (like walk!) after so many years of being able to do nothing? If there is one thing that I get very angry about for you it is that.  Maybe I just like the way it made me feel after all those years of moaning at you telling you to get a grip on the life you still had.  I wonder how you feel now about those dark times - do you remember them at all?

I wish I knew how much of those three weeks in hospital you are aware of.  I have still not been able to talk to our brother about it, I know he was the last one to have a conversation with you even though you were in a bit of a delirious state, I know you must have been reasonably with it, as I'm told you told him you were not afraid of dying.  I find that a bit hard to stomach really, surely you didn't want to leave A?  Or did you just know that you were not going to be able to give her what she was going to need through those demanding teenage years?  I'm not sure whether I feel proud of you if it's the latter for honesty or cross with you for thinking anyone else was going to be able to do it!  I most certainly don't feel as though I am doing a very good job at the moment.  Whatever, it's happened now and maybe I am just jealous that he was close by enough to be able to help and have that conversation and I wasn't.

Poor mum is struggling, I think the unresolved grief she had for her mother dying when she was so young, has prevented her from mourning you yet.  Dad soldiers on, I still don't fully understand him, I do know though that he is totally devoted to mum and for that I am grateful.  Just after the first anniversary of your demise he managed to go and have a stroke that certainly came out of no where just like your  ruptured bowel!  He was very fortunate to get to the specialist unit near them where he was scanned and on clot busters within an hour of it all happening.  It has aged him though, he looks more like Grandpa now, I don't suppose you would remember him to well as I only just do.  It's quite shocking to see someone go from looking early 60's as he was to in his 80's in a couple of weeks.  That reminds me - were you aware of how many grey hairs you had?  Maybe they only arrived in the time you were in intensive care, I certainly remember how it started to fall out in that last couple of weeks.

Well I am going to have to sign off for now, the children have had their tea but it baths and showers for all three tonight.  Tuesday is the only night of the week when none of them are out at something!

Email ThisBlogThis!Share to TwitterShare to FacebookShare to Pinterest
Labels: Grief, My Story, Writing