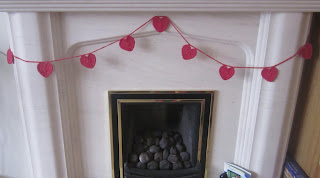 My dear friend over at 10 minute writer has been tweeting her love story today (using #ourlovestory)  as it is her 18th anniversary of meeting her future husband on line.  I decided to get in on the act.  I did write a little bit way back when my blog was very new, you can see that post here.  But thought it would be lovely to keep a more sturdy record of my tweeted version, so here it is:

Don't remember our first meeting,it was on the aisle of the church where we later got married. A friend set to match making us

Jane D ‏@MrsJCraftypants
We ended up as leaders for a young peoples event. He wrote a rap about God one evening which he shared. I was bowled over

Jane D ‏@MrsJCraftypants
Next time we met was a friends housewarming party. He arrived as everyone was leaving after an afternoon shfit, I stayed on

Jane D ‏@MrsJCraftypants
We talked about house plants and I said I would take a cutting off mine for him. When we left (very late) we shook hands.

Jane D ‏@MrsJCraftypants
He called me a few days later and asked me to go on a date. We went and had a fantastic evening getting to know each other

Jane D ‏@MrsJCraftypants
our told him I had made a deal with God not to kiss another man until I found the one I was going to marry. He was waiting too

Jane D ‏@MrsJCraftypants
He dropped me home and I gave him his pot plant - he called it Audrey - we still have her 18 1/2 years later.

Jane D ‏@MrsJCraftypants
Our next date a week later, I met some of his old school friends from Manchester, we went to a garden party - we kissed!

Jane D ‏@MrsJCraftypants
Audrey flourished, so did our love for each other, we had one big obstacle though - my man did not ever want a family, I did.

Jane D ‏@MrsJCraftypants
12mths ltr he took me to a fave place, waited for Concorde to fly over, went down on one knee and surprised the life out of me

Jane D ‏@MrsJCraftypants
A few months later in May he gave me the wedding of my dreams, we left the reception afterwards VERY early ;o)

Jane D ‏@MrsJCraftypants
Our 1st child was born 3 yrs later our 2nd 17 months after that. Life has thrown us some challenges, but we are still in love

If you fancy writing yours I would love to see it, I am very much a romantic at heart!  Do leave a link in my comments.