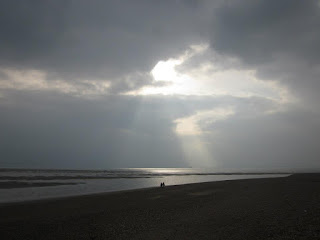 The funeral is over, two weeks have passed, I am trying to find a new normal.  I seem to be collecting the experience of all types of death, the sudden, the short illness, the long term illness and now the taking of one's own life.  I have so much to be thankful for at the moment.  My friends have been truly wonderful.  My husband has now lead the funeral services of both my parents - he did so with so much poise and love - what can I say. This is the eulogy that my lovely husband read at my mums  funeral service:


Hannelore  was born on the 18th October 1946 to Margarete Roehrig in Hamburg, Germany.  The result of a liaison with a British soldier at the end of World War 2, who mum never knew.
By the age of 5 she was nursing her mother Margarete until she died after a short illness.  Her next 12 years were even more tragic.  She was abused and let down by every adult in her young life, even by her Aunt Charlotte and her husband who chose to adopt her.

However, at the age of 17 she met her knight in shining armour.  Whilst on holiday in Ventnor on the Isle of Wight in 1963, Lore met Colin and within six months of meeting they were engaged to be married.

Another important adult that came into mum’s life after she met dad was his mum, my Grandma B.  She took my mum to her heart like she was one of her own and mum was devoted to her, literally right to the last breath of Grandma’s life.

Having been forced to leave school without any qualifications she was amazingly able to forge her way to a successful business career, from starting in a typing pool to becoming a company director at Diaploy.  My mum and dad started married life with nothing, but through sheer hard work, they were able to provide for us all.  I remember well as a child my dad coming in from work and taking my mum to Breadsall Priory to do a night shift.  It was in mum’s first job when she came up to Derby from Kingston upon Thames to marry dad that she met Helen, I’m sure she would have lots of tales to tell of what they got up to.  Mum showed me not that long ago a scrap book that the girls had given her when she married dad.

Mum was always dreaming up new business ventures, there was a shop on the main road through Draycott when we were very young, something she did along with her friend Glenys – I remember it being a great resource when it came to needing an outfit for the Draycott School fancy dress competition.

As many of you probably know mum was always looking at new ways to be creative.  She often made matching clothes for Sally and I when we were young.  She was a talented knitter, could crochet, do embroidery and tapestry, even basket weave.  She also learnt how to make stained glass objects, the pinnacle of that craft being able to complete the beautiful rosewood kitchen that dad made with stained glass cupboard doors in one of their houses.

Then there was the introduction to Bees.  This not only provided a good sense of purpose after mum had retired but also produced an enduring friendship with Ben and Justine whom mum adored.  But it was not just honey that was produced.  There was B's Beeswax polish, my dad’s old recipe.  The last time I remember mum being really happy was when she was off to a craft fair with Ben and Justine laden with honey and waxy stuff.

It was after moving to L E that I remember mum and dad’s friendship with Len and Jan becoming very apparent to me.  We all lived on C Street, though at opposite ends and it was a very long street!  I have many memories of them coming round for meals and later when mum and dad were at W  Road they really enjoyed Len, Jan and Harry the dog popping round for a drink, and Harry always got a treat.

Mum’s love and care for dogs was shown in the two dogs that she had, Topsy when we were growing up and Mandy when we were supposed to have left home.  Both lived long lives of over 17 years which I have always put down to the love they had from mum.  It was a great sadness to her that dad did not feel able to have another dog after Mandy.

The last 13 years had been very hard for mum to bear.  The deterioration in my sister S's health and her passing away 4 years ago had taken its toll.  The one bright spark during these times was having their grand-daughter A come to live with them from the age of 3.

After Dad suddenly died 14 months ago, she was completely adrift.  The traumatic events of her early life came back to haunt her in a manner that put her into hospital for 4 months.  I am so thankful that I got to spend more time with her in the last 14 months than I had in the previous 30 years.  We have been dog walking at the beach, swimming regularly during the week (and even in the sea a few times) and having lots of family meals together.   She had also come along and kept me company at many of the concerts that S and A were playing in.

I hope that it will be of comfort to my brother John his wife C and their children J and A that they got to spend what turned out to be her last Christmas with them.  She had been so grateful to John in the last 12 months for relieving her of the great burden of clearing out 45 years worth of paperwork by packing up the house in L E while she moved down to live near me.

I know mum’s life was bound up in shame and secrecy.  Iit is something we had talked quite a lot about in the last few years, and she was slowly starting to reveal some of the awfulness that she had been made to endure in her early life.  While in hospital a year ago she came to realise that the years of bottling up all that trauma were the cause of much of her inability to cope.  Maybe the one legacy that we can all take from her untimely leaving us is the importance of finding people you can trust and talking, opening up and sharing life’s ups and downs.

For me, life is never going to be quite the same again.  I had hoped that I would be able to look after her into a good old age, the way I saw her look after Grandma B.  However it was not to be.  Now we must all find our own way to remember with joy the good times, grieve for the bad times and make the best of the lives that her life made and touched.
Posted by Jane D. at 09:12