Over the last 5 years my attention has been taken away from my family.  I have literally 'forgotten' how I wanted to parent.  Did you catch the 'I wanted' there?  I have always known I needed to parent in a different way from the way I was parented.  I am now starting to realise just what this means.

Now don't get me wrong - I do not blame my parents for parenting me as they did - they did what they could with the resources and experiences they had.   The result of the parenting I received however means I am burdened down with the injunctions that they moulded me with.  The phrase that sums up my up-bringing is 'Stop Showing Off'.  The effect of those three words has been devastating.  They were said for absolutely anything I did that was in any way different from how they behaved, the words came to mean - 'Stop being you'.

I remember with horror the first time I said it to my daughter - I think she was about 7 years old.  Fortunately I had confided in my husband about this injunction and so was able to talk to him about it afterwards.  It is not until I started to have counselling however that I have realised how far this injunction and all that follows it still affect me.  With my attention elsewhere for the last 5 years (looking after mum, dad and my niece) I have sort of lost the plot with my different way of parenting.

I have happily given over a day every 14 days (over the last 6 weeks) to my niece, however I am still not giving my own children their own time with me.

Last week, I managed to watch a movie with both of them (individually - they have very different tastes).   I love the way God knows what my hearts desire really is.  Today I was in a quandary.  I had planned to take my daughter shopping this morning, knowing I had counselling this afternoon.  However a friend asked if A would like to go for a group bike ride (something she loves) first thing.  I thought maybe we could shop in between finishing that and me going out.  While she was out though I started to think that it was all going to be too much of a rush.  As a result when she came in I gave her the choice.  Either we could go straight away or she could come and meet me in Winchester after I had finished.  She chose the later and I am so pleased she did.

It gave me chance to talk through lots of issues with my counsellor, stuff that tied me down and needed bringing out in the open so that I could really do what I wanted to do - that is SPOIL my daughter. 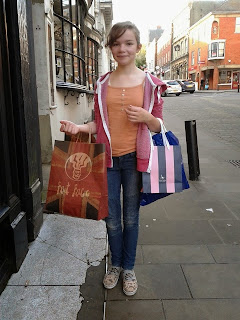 And so I did.  We had so much fun, shopping for a couple of hours and then going out to eat together.  Tonight I am very exhausted...............but very happy and proud of myself.