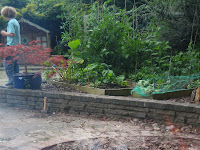 I have had a mixed result in my veg patch this year. We have had some good crops:

and some disappointing crops:

We did get some surprising crops, like potatoes which I hadn't even planted, a root in the compost maybe?? Had enough for a meal for the 5 of us and were a good size, but plants got blight after the tomatoes so had to dig up early to burn the plants along with the tomato plants. My mum has helped no end, her early mornings (4.30 am onwards) mean she has usually done a good few hours before anyone else has been up. She managed to salvage lots of green tomatoes which as you can see by the picture have nicely ripened by the window.

So over the last couple of days I have worked in the garden a little and with my sons help have managed to sow some more carrots, transplant some seedlings that mum sowed in trays a few weeks ago, lettuce, sweetcorn and pumpkins and have carefully erected some nets over them, hoping we might get a little more produce before the end of the year. 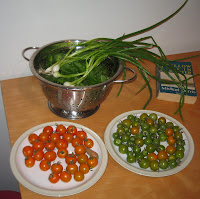 the spring onions and spinach in the colander are what went into my risotto last night for my husband and I and it really was quite delicious even if I do say so myself.